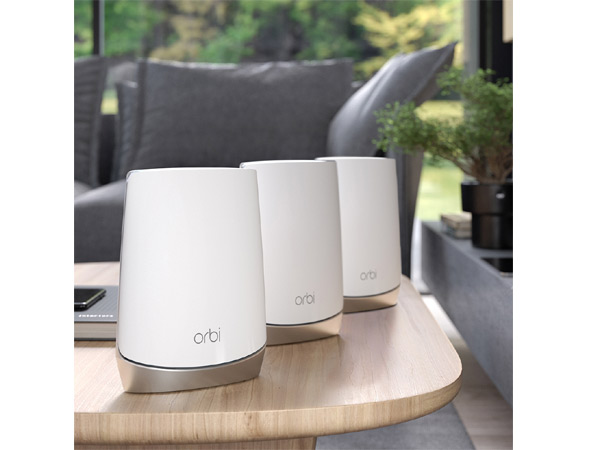 Increasing demands of higher data transfer speeds over multiple simultaneous device connectivity across your entire home put a huge strain on your existing wireless networking system. And with newer gadgets and laptops sporting the latest Wi-Fi AX (Wi-Fi 6) standards, your old router may need to retire. Older technology wireless routers can support throughputs of up to 750Mbps on the 5GHz band but give up when simultaneously catering to multiple devices. Yet another challenge is their network coverage or range, leaving the most important areas in your home into a dead spot. To address these ever-growing demands of higher speeds and wider coverage, NETGEAR presents one of its most powerful Wi-Fi 6 Mesh systems – the Orbi RBK753. This three-unit (router + 2 satellites) mesh boasts coverage of up to 7,500sqft with blazing speeds of up to 4.2Gbps simultaneously on 40+ devices.

NETGEAR’S Orbi AX4200 Tri-Band Wi-Fi 6 Mesh System (RBK753) boasts of an Award-Winning, unmatched performance, using a Tri-band mesh technology. While the two usual bands (2.4GHz and 5GHz) are used for your daily devices, the third band is used by the satellites for seamless connectivity and to deliver maximum speeds throughout your entire home. The RBK753 is a 3-part router-satellite combo with each unit featuring six antennas with high-powered amplifiers, creating Implicit and Explicit Beamforming for 2.4GHz and 5GHz bands and MU-MIMO that’s capable of simultaneous data streaming to multiple devices. Powering the routers is a powerful quad-core 1.4GHz processor with 1GB of RAM. Four Gigabit Ethernet ports (1 x WAN + 3 x LAN) on the router and two on each satellite allow for high-speed physical connectivity from your ISP or to your devices. When all three RBK753 units combine and work together, you can get blazing speeds of up to 4.2Gbps in every corner of your home or office up to 7,500 sqft.

Your wireless experience just gets better with Amazon Alexa and Google Assistant compatibility. Simply command your Orbi with your voice for features such as turning on guest networks, speaking out your guest SSID passwords, and a lot more. The Orbi RBK753 also protects your network and its connected device family with antivirus and data theft protection NETGEAR Armor. You can also set up the entire mesh network and control every feature using the Orbi App. Run diagnostics, check who has logged into your Wi-Fi, test the internet speeds and a lot more can be done from your smartphone even when you are away from home.

The NETGEAR ORBI AX4200 Tri-band Wi-Fi 6 Mesh System (RBK753) is available in India through netgearstore.in, Amazon.in and other leading e-commerce platforms at a discounted price of INR 49,499.